Pleased to have a brand new short story of mine, “Psyche,” in the latest print edition of The Main Street Rag literary journal, volume 24 number 4, Fall 2019.   It’s a print zine, so try to buy a copy and dig all the great authors involved.  My tale follows right here…

We met at an art opening. My friend Jeric was debuting a series of mixed media canvasses and sculptures examining the role of the psyche in social media. There is chaos in structure and all things repeat were my takeaways from the show. But, I never had a chance to discuss it with him, because I was diverted by my future.

She was in the corner studying a piece, called “Your Story” a collage of broken glass, stone, and wire, covered by layers of translucent wax hung like netting over the base, in layers. It was backlit by a single blue spotlight. Against this backdrop she stood, wearing a very fashionable 1920s flapper hat that that accentuated her black hair and deep set eyes. Dark and inviting, I asked if she was up for a ride to Great Neck. It was atypical for me to chat someone up this way, but she got the joke and we began talking about Fitzgerald. The conversation that followed was engaging, and wide-ranging – art, books, philosophy, meaning. She came back to my place for more and stayed the night. After that, we began to see each other fairly regularly. Her name was Jane and she came and went like a cat, usually at night, seemingly random, but, with precise intent. Sometimes we’d be out of touch for a few days and then all of a sudden, she was in the neighborhood on some random errand, what’s up, and of course, I’d say nothing and soon, she’d be walking the walk down the hallway to my bedroom. Lucky for me I was self-employed.

I grew up in the Midwest, and it shaped me. It was a middle class upbringing and when I became an adult, I just kept grinding, working at what I did, getting better and making a bit more dough as I went, adding it to my bank account. I didn’t draw attention to myself. And, along the way I continued to live simply, buying my clothes at Goodwill, rarely eating out, and running my cars into the ground. I bought art when I traveled – prints, paintings, sculptures – and that was my only indulgence. This modest approach came in handy with women, because there were few external signs to focus on, as to what I did for a living, where I’d been, or where I was going. That came later, if at all. It allowed me, and us, to simply be, apart from personal or material flash. But, with Jane, I experienced cognitive dissonance. I began to wonder if she could really see who I am. I began to question my ability to trust. I began to wonder if any of this mattered.

About six months in, soon after midnight, she woke me up to tell me about a dream she had. She brushed the hair away from her face and spoke rapidly, as she often did. “It was really weird, you lived in this huge mansion, 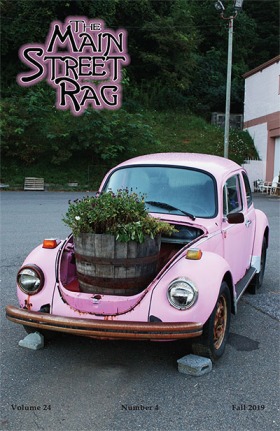 it was like something you’d see in Belle Meade or something. And it was filled with art, but not modern art, classics.” She gestured with her hands, accompaniment to her story, flinging paintings into the air. “Matisse, Picasso, stuff like that. And it was your house, but you weren’t there. I was with Jeric.”

Jeric was, of course, the artist who had drawn us together, a mutual friend, met through different journeys. “And he kept telling me I must never see what you look like.” She stopped suddenly .

I ran a hand across the smooth of her back as she sat up in bed. “It doesn’t have to mean anything.” I said, providing what I thought was a gentle touch. We were enveloped in the darkness, shadows coming through the blinds and crisscrossing the bed. A sliver of light from the streetlamp painted the covers, just missing our faces.

“Oh yes, it does. It means something,” she said, biting her lip. “It always does.” She jumped up and stood by the side of the bed. “I must never see what you look like, “she muttered a couple times. “Do you mind if I light a candle?”

There was a candlestick holder on her nightstand, which I’d bought in Kenya. It was carved out of soapstone, a type of metamorphic rock that allows the sculptor to twist the base like a piece of rope. Or a snake. She admired it on our first night together and brought it in from the living room for whenever she came over. It always sat on her side of the bed and now, she reached for it and lit the wick with her lighter, the flame casting a soft glow over her naked lithe body. She was the tallest woman I’d ever been with, and she carried herself with grace. I watched as she got up and moved around the bedroom as if she’d never seen it before, walking slowly, considering things.

“No Picassos, but you do have nice things, the glass sprite, and of course, the woodcuts. Are they expensive?”
“I don’t know,” I said, “I just pick them up along the way.”
“Ah,” she said, teasingly. “Like me.”
“If you live long enough, you accumulate things, “I joked. “That’s how it is.”

She came back to the bed and lowered herself, smiling, straddling me and holding the candle over my face as I lay on my back. “You are so hot,” you know, “seductive.” She pulled the covers back a little and let a drop of candle wax fall on my chest. “Oh, I’m sorry, did that hurt”

“No, I replied. It’s fine.”
“We should try that sometime,” she said slyly, “I did that once, with one of my exes…” She set the candle back down on the nightstand and slipped back into bed. There was a pause “Jeric.”

It was unprompted and maybe that’s why the revelation unsettled me a bit. I wasn’t jealous by nature, but I wondered how it was I didn’t know, and how long ago it was. Sometimes I wondered where we were headed, but I rarely wondered where we’d been. I also wondered if any of that mattered. She read my thoughts.

She backed into me and I put my arms around her, spooning from behind. Wax dripped on the floor, drop by drop, until the candle disappeared. After that, the walls began to melt, liquid slowly pooling on the floor around the bed, hardening as the colors mixed. The glass sprite broke into pieces and the woodcuts were destroyed as they fell. Silently. All that remained was the door frame, where the opposite wall had been. My temptation was to jump through, running as fast as I could to the open sky beyond, dark but dotted with starlight. There was nothing but space around us. But, somehow Jane slept through the chaos, unaffected, as she had many nights before and so I simply held her tighter and closed my eyes as the bed floated away, into the slipstream, our souls and psyche intact