Really nice gig at WDVX Wordstream in Knoxville, reading from Unopened and playing some tunes.  Also, really nice press piece from the Daily Times in Maryville

Doug Hoekstra is what some people might refer to as a Renaissance man. Raised in Chicago and currently residing in Nashville, he’s a single dad, a prolific author and a singer-songwriter. With nine albums and three books to his credit — his latest literary effort, a book of poetry titled “Unopened,” was released earlier this year — he boasts a wellspring of creative ability.

Not surprisingly then, his efforts have been well received. After doing his undergraduate work at DePaul University and obtaining his master’s degree from Belmont University, he went on to receive an Independent Publisher Award for Best Short Fiction and contribute to dozens of well-respected literary journals.

As a musician and performer, he’s reaped wide acclaim as well. He’s been cited by critics for his clever, conceptual songwriting, articulate means of expression and a descriptive style that recalls Bob Dylan, Leonard Cohen and other icons of similar standing. A Nashville Music Award and Independent Music Award nominee, his albums have found their way to any number of annual Top 10 lists. At one point, he was the epitome of a journeyman troubadour, but these days he remains not only devoted to his craft and creativity, but above all, to his son, Jude. That’s found him juggling parental responsibility with his writing regimen and a musical mindset. 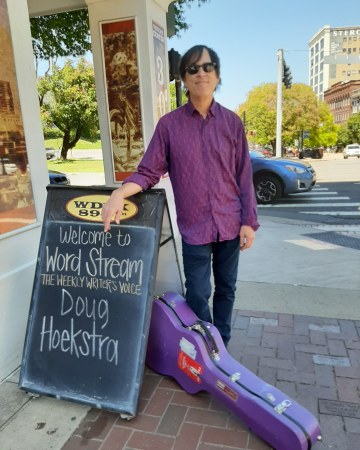 “I’ve always written prose and music in some fashion,” Hoekstra said. “I started out writing short stories, and my degrees are in English and creative writing. I like artists like Dylan and Patti Smith, who manage to weave rock ’n’ roll and poetry together. My first book, ‘Bothering the Coffee Drinkers,’ was my fictionalized version of what I saw in the music world. I’d write the short stories and then get them published in various magazines. So the collection was a great way to complement what I was doing musically. That really got me going in that direction.”

“Unopened” marks his first foray into poetry, and he said his son was one of the prime reasons for the project.  “I sort of put my music on the shelf to focus on my son and life in general,” Hoekstra said. “But if you’re a creative person, you still tend to focus on what’s going on around you. So it seemed that was the format that I could do that in, perhaps not more easily, but certainly more fluidly, without having to tour or into a studio with a band and so on. I originally conceived it as something I could give to my son as a keepsake, but it started to take on a certain shape and form that I thought was pretty cool. I then started writing to that form, and suddenly I thought, ‘Well, I guess I have a book.’ It was very organic in the way it came out.”

That said, Hoekstra said he sees no difference in the way his art tends to be expressed.
“To me, the form is all the same,” he said. “It doesn’t matter whether it’s a painting or a song or a film. It’s still about taking your experience and filtering it through these characters, and presenting it in a way people will hopefully enjoy. What I found in doing the poems is that I could do them in a way that was more direct.

“I don’t think I’d put those subjects in a song in the same way. There’s something different in the point of view with a poem. They allowed me to go into places that I wouldn’t in a song. I got the sense that these are topics that are better suited to poems.”
Accordingly then, Hoekstra said he found the book to be a liberating, if somewhat unexpected, experience.

“When I think about the kind of songs I write, I’m forever influenced by Dylan and the way he writes, which can be intensely personal and yet symbolic at the same time,” he said. “That’s the gold standard for me. As a songwriter, that’s what I’ve tried to go to. While I touch on personal things, I would never frame it in a way that was self-indulgent. So when I was doing the poems, I wasn’t thinking about the music, and that made it more freer than anything I had done in a while. You just roll with that.”

With his son in high school, Hoekstra said that he’s now finding more time to devote to his creative ventures. He has a new album in the works — his first in a decade — as well as plans for another book of short stories.  “I’ve demo’ed about 15 new tunes, which are the first songs I’ve written in ages,” he said. “I’ll be doing some recording in Nashville and then up in Chicago to record with a friend I once worked with, as well.”
Still, Hoekstra acknowledges that getting back into a more prolific posture may be a bit of a challenge after such a long layoff. However, he also insists he has no regrets.

“I took time off to be with my son, and it was great,” he said. “I look back on that period as the happiest time of my life. When your kids are that age, it’s golden. Still, you have to be free to keep the ideas flowing, even though that can be hard to do when you have pragmatic things you have to deal with.”

IF YOU GO
Doug Hoekstra (poetry reading and music performance)
WHEN: Noon on Friday, Aug. 30
WHERE: WDVX-FM studios, for the radio show “Wordstream,” broadcast live from the Knoxville Visitor’s Center, 301 S. Gay St., downtown Knoxville
HOW MUCH: Free
CALL: 865-523-7263