When I was a kid, my folks always played the same April Fool’s joke on me. I’d be lying in bed and one of them would come in and wake me,  saying “it snowed last night.” Of course, I’d get up, look out my bedroom window, and see there was no snow.

It’s a memory I have and at this point, all memories of my folks are good ones, now that they’re not around. Even the bad times become good, my tip for those of you who still have your parents.  That said, in hindsight, I always wondered why they fooled me with that one, because as Prince once sang, sometimes it does snow in April…particularly in Chicago

As time went on, however, I joined in and then, kept trying to raise the bar. About five years ago, a couple years before they passed, I came up with a good one. I called them up from Nashville and told my Dad that my brother Dave was engaged to be married. ‘Didn’t he tell you?” I said, incredulous they hadn’t heard.

FYI, my brother is the Harry Dean Stanton of bachelors.

My dad was floored. “Irene,” he shouted, “get on the phone. It’s Douglas.” She got on the other line and I explained. “I guess he just met her,” I added, “and he’s head over heels.” I added a bit more to the tale, making it up as I went along, keeping it going just long enough to spring the punchline. April Fool’s!

They both cracked up. In fact, they loved it so much that as soon as we got off the phone, my dad pranked my brother with the same joke, with me as the centerpiece. They were around 90 years old at the time, still sharp as could be.

On a recent road trip, my son and I listened to some family interviews I did with my folks about ten years before they passed. I used a book I found on oral histories and covered every part of their life, from childhood through the war to their meeting, to us kids. One thing I notice listening back is that they were completely of their generation, in that they didn’t readily express emotions. Lots of questions about love and family were answered in very understated tones, like “well, it was good to have a companion” or “it was time to plan our lives together.” That’s how it was back then. That’s what you did. You got after it. You did what you were supposed to do, but you didn’t make a big deal about it.

But, for some reason, April Fool’s was different, as they threw the restraint and caution out the wind, somehow appropriate with the coming of spring. And today, I can hear echoes of their laughter coming in from the other side. 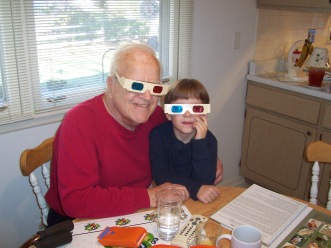 (pix of my folks goofing – w/my son on the right)