Peter and his Auntie

This past summer (2013), Jude and I went to the Ryman Auditorium in Nashville to see the three surviving Monkees  hop the first train to Clarksville and play a string of their deepest album cuts and greatest hit singles. More than a bubblegum parade, it was an impressive array of tunes that today’s hipsters cover and claim, songs written by the some of the best crafts men and women of the day, songs like Goffin/King’s “The Porpoise Song” from the movie Head and Nesmith’s own “You Just May Be the One” and “Listen to the Band.”

I’ve taken Jude to see Dylan and Sir Paul and other heavyweights, but this show was my guilty pleasure. “I’m a Believer” was one of the first 45s I ever owned;  I “sang” a cover version of the Sex Pistols cover version of “I’m Not Your Steppin’ Stone” in my first band, and Michael Nesmith at the Cubby Bear was the first show I ever went to with Jude’s mother. Nesmith provided strange cred for this particular summer tour, but as we stood in line behind a girl wearing a Monkees J.C Penney shirt with buttons up the front, knit stocking cap, and fake sideburns, I had no idea what was to come.

In many ways, it was a revelation of vindication.

Early in the set, I watched mesmerized as Peter Tork pranced across the stage like Pan, shirttails flapping, delivering the  night’s worst song,  “Auntie Grizelda,” with glee.  My heart immediately filled with immense sympathy.  The Monkees were not the first or only band in the world to use session musicians, ace songwriting teams, or hotshot producers, in the efforts to scale the hit parade and become  besotted with fame, riches, and girls. Yet for some reason, the Monkees were heaped with possibly undue and  unprecedented criticism.  For Tork, in particular, who was arguably the most musically accomplished of them all,  the knocks on their abilities had to have been difficult. 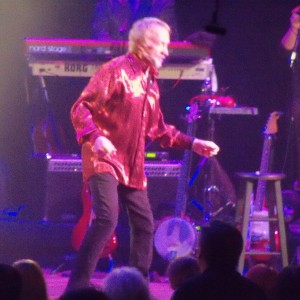 Flash back to 1967 and the Hollywood auditions that led to their rise and demise. Tork was a Greenwich Village folkie relocated to New York; his friend Stephen Stills had just been rejected by the casting call for this show. They liked Stills,  but asked him if they knew anyone like himself, only more photogenic and with better teeth.  He recommended his friend Peter Tork, who went down to the studio and got the gig. Had the axis of the world tilted just slightly different, it could’ve been Crosby, Tork, Nash, and Young, whilst Stephen Stills would be on the road reclaiming past glories with the surviving Dolenz and Nesmith, asking endless questions well into the 21st century about the fact that they weren’t allowed to play their own  instruments – at first.

Then and now, if you had the chance to have Hal Blaine and the Wrecking Crew lay down your backing tracks, you’d have to find good reasons to say no.

Of course, the Monkees turned their fabricated hand into a real band, and fought to gain control.  Over the ensuing years, they grew up, grew older, married, had kids, left the band, came back to the band, divorced, veered in and out of the business, and now, landed in Nashville’s most historic venue, laying it down, with Dolenz on drums (and sometimes lead vox), Nesmith, on guitar, and Tork on banjo, bass, keyboards, and guitar. The extensive backing band complimenting them was tight, but on the Headquarters material, the Monk-threes took over and let them take a break. As older gents, they had come full circle, clearly enjoying the music for its own sake, and playing it well. Tork, like every performer I’ve ever seen at the Ryman, took a moment to comment on  how amazing it was to be doing a show in such a hallowed venue.. He seemed pleasantly comfortable in his own skin, able to walk a line between Nesmith’s uber seriousness and Dolenz’ uber goofiness, simply relishing the  opportunity to play.

The giant video screen behind the stage played scenes from the TV show and in a tribute to the fallen Davy Jones, they projected him singing “Daddy’s Song,” a Harry Nilsson song featured in their movie Head. Since Davy was gone from the earth (and the Monkees souvenir t-shirts, as well), they pulled a member out of the audience to sing lead on “Daydream Believer” and lead the audience  in a rousing singalong. Was that cheesy?  Maybe, but as I looked around, I saw the Ryman filled with people singing along, being happy, enjoying a moment and remembering good old times, when they were young and innocent.   And, as I looked around, I also saw the Ryman filed with people singing along, being happy, and experiencing good new times in that moment, becoming young and innocent, whether they had ever been either.

Up front, there was a woman in a wheelchair with limited use of her legs and arms, who I had seen nearly buying out the merch table before the show, loading her lap with Monkees swag.  I wondered how far she traveled, how much work it had been for her friend to carry her in and out of the car, find the elevators, get her to her seating area.  I wondered how many days she’d had the show circled on her calendar.  My guess, like all of us, she became part of a community, forgetting all else, dancing and swinging in her mind, and during “Daydream Believer,” believing in something, despite the nonsensical lyrics.  What is a Daydream Believer anyways?  I once played a gig in Philadelphia opening for the song’s author, John Stewart.  I wish I’d asked him.  Anyways, all I can tell you is I cry at the end of  It’s a Wonderful Life, every time I watch that movie.  And, during this crowd-pleasing Monkee sing along, I teared up.  Maybe it had something to do with the fact that Jude was with me, singing just as loudly as the rest, because I feel everything so much more deeply when he’s next to me.

Simply by his essence, Jude reminds me that every day we need to keep a little room in our hearts for the seeds of youth, guilty pleasures, and pure entertainment that gives us space for an embrace.  And, on that night, the Monkees, of all people,  underscored that thought,.  And, like all of us, they did it carrying their own crazy combination of pride, talent, love, shortcomings, and hope.